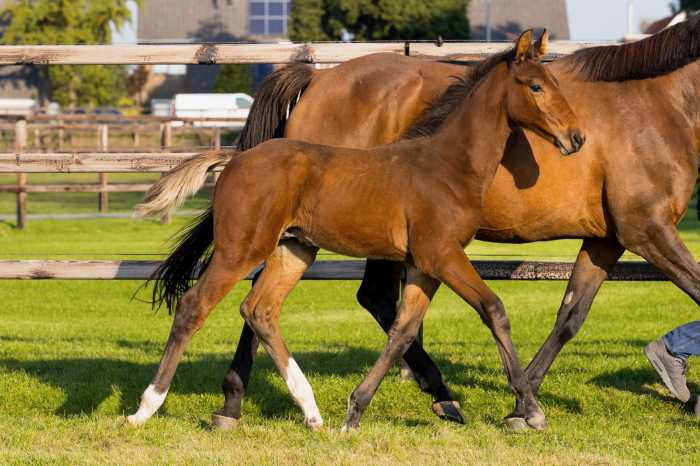 Part 1 of the two day Youhorse.auction went well. The showjumping foals were sold for an average amount of almost 8,000 euro and each and everyone of them leaves for countries abroad. Auction topper Scout Z (Stakkato Gold x Kannan) out of the celebrated Roosakker family was knocked down for 16,000 euro and went to an Irish Grand Prix rider in Switzerland.

Eight Polish purchases
Thus, the Irishman frustrated a Polish buyer, who proved very persistent on Monday-night. This Polish client, who had bought sport horses from Alan Waldman before, made the penultimate bid on Scout Z, but did manage to get eight other foals. “That is remarkable, he bought eight from the eighteen foals. We immediately contacted him after the auction and he was very enthusiastic”, says Mario Everse, who runs the auction together with Alan Waldman.

Confidence
“We can only be very pleased. Only one foal did not get sold. There have been so many foal auctions already. Anyone who wanted to buy something had already done the shopping. This auction takes place relatively late in the season, but we had a lot of confidence in the damlines and that proved to be justified, looking at the results.”

Young horses
The sixth edition of Youhorse.auction will continue on Tuesday with the end of the auction of the young showjumping horses. The 37 horses, ranging from 2- to 4-yr-olds, are auctioned in lots of five as from 20.30 hours (CET). There is a lot of interest in, for example, Harley Star (by Quick Star) and Renske van ’t Eigenlo (by Echo van ’t Spieveld). Almost all of the horses have received online bids already. “Considering their quality, they are still below realistic prices. There will definitely be some bargains amongst them!”