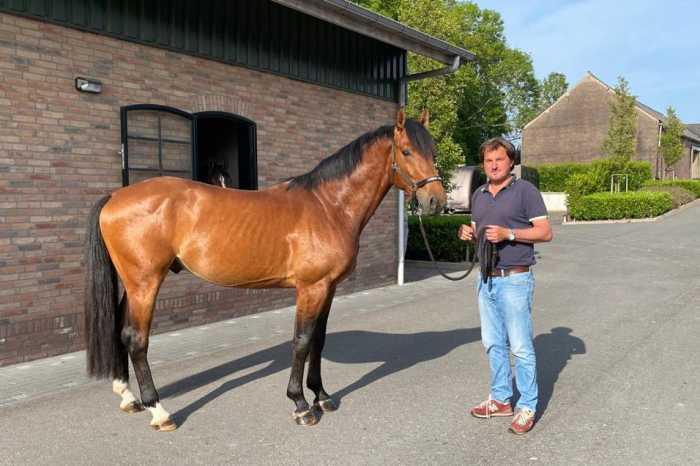 SECOND YOUHORSE.AUCTION CLOSES WITH MORE THAN 600,000 EURO IN TURNOVER

Although the corona virus is still keeping the riders at home, there was good shopping on Thursday May 7 in the second edition of Youhorse.Auction. Mario Everse and Alan Waldman had the majority of the 44 showjumping horses knocked down for a little over 600,000 euro. The USA and Canada proved to be the biggest buyers, but Great Britain is coming up.

“We are really pleased. We had expected a little more from the ridden horses, especially the real quality ones among them. A number of them did not get sold, but most of them found new owners! There was a noteworthy demand for the amateur horses, which are straightforward and pleasant rides. Some where knocked down for a little less than we had hoped, but other horses balanced the scales”, says Mario Everse.

86 countries
The collection included 3-yr-old showjumping horses, saddle-broken 4-yr-olds and a few older horses with show experience. The online auction opened on May 5 and was visited by people from 86 different countries. “The clients were even a little anxious. Some contacted us by telephone because they were afraid to miss out on a specific horse because they were not too familiar with the PC. Even some dealers bought our horses, but also professionals and amateur riders. Again, we offered a few real bargains.”

Most expensive horses
The two most expensive horses were bought by one of their regular buyers from the USA. The 4-yr-old Quando van de Bisschop (Harley VDL) and Limited Edition (Gullit HBC x Vingino) were knocked down for 36,000 and 35,000 euro respectively, but will stay at Stal Everse this year to be trained.

For 25,000 euro the 3-yr-old Monaco (Chapeau TN x Ahorn) will move to Canada. The 4-yr-old Love (Diamant de Semilly x Heartbreaker) and the 3-yr-old Me The Rebel RT (Cornet Obolensky x Baloubet du Rouet) will both cross the sea to Great Britain, for 22,000 euro each. The 6-yr-old Cardenta van de Eijkhof (Cardento x Diamant de Semilly) will stay in the Netherlands for 21,000 euro. The same amount was invested in the 4-yr-old talent Lime ’n Ice (Iceman de Muze x Lux) by the Emirates. Their contemporary, Legend (Diamant de Semilly x Carthago) will go to Italy for 20,000 euro. There were also buyers from Belgium, Germany, Sweden and Poland.

Next auctions
In the meantime Alan Waldman and Mario Everse have decided to keep monthly auctions and have already reserved the following dates. From June 13 to 16 there will be a similar auction with young horses. Other people are also invited to offer their horses for sale in this auction. Anyone sending in a Whatsapp with video, brief info and link to pedigree before May 20 will soon hear if their horse is accepted. The selection/video-days will take place from May 22 to 24, after which the new collection will be go online on June 6. The auction after that is planned for July 24 to 27, but then it is the turn for foals and broodmares.